"A person cooking is a person giving: Even the simplest food is a gift."
Laurie Colwin 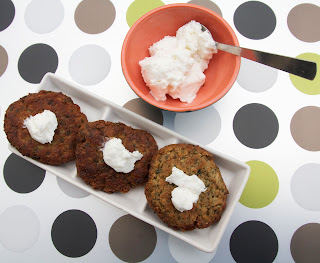 We've all wasted food, but let me tell you, you know nothing about wasting food until you've been in a professional cookery class on Turned Potato Day.

For those of you who are too young to remember Nouvelle Cuisine or spent the 80s trying to master beurre blanc, turned vegetables are vegetables – usually roots and tubers – that are "turned" into five- or seven-sided barrel shapes with a turning knife (or ordinary paring knife if you're a Turning Genius).  It is not something that is relevant any more (when was the last time you saw a turned vegetable?) or something that you can learn in a few hours when you've also got another six precision cuts to learn, but still, it's in the curriculum, so we give it a go. 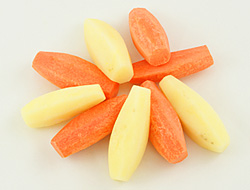 I show the students a video.  Then I demonstrate.  Once.  Twice.  Three times.  These kids try.  And fail.  Fail so spectacularly.  They fear cutting towards their thumbs, they fear the long continuous cut, they fear gripping the veg.  One potato looks like Headless Yoda.  One student thinks the pile of trimmings she's got is the turned potato.  I send them to get more potatoes.  The pile of potato trimmings – not peel, actual potato flesh – grows and grows.

While they try and fail, I chop up the potato trimmings and throw them into a pot for potato soup.  While I chop, I remember when I learned to turn veg.  I'd already had the obligatory lesson on turning vegetables but the turning moment, so to speak, was during a week's work experience at Mietta's in 1993, when Mietta was still alive and her restaurant was one of Melbourne's flagships.  Mietta's had a traditional French kitchen brigade (read: arrogant, tough, and properly sexist towards women in the kitchen) and a traditional French menu.  No vegetable was ever served in its original form.  Spuds were sliced thickly and then cut into rounds with a scone cutter.  Perfect baby turnips were shaved.  And carrots were turned.  So my real lesson on turning veg happened when the sous chef pointed at a 10kg bag of carrots and said, "Turn those!"  By the tenth carrot, my turning was pretty damned perfect.  (And I suffered.  That amount of turning meant that I ended up with microscopic cuts all over my thumbs from the motion of stopping the turning knife.  Not a problem, until the sous chef got me to shell 10kg of Moreton Bay bugs immediately afterwards.  Ever had an infection on your thumbs?  Not nice.)

But I digress.  I hate waste.  I use up the potato trimmings for a soup that isn't altogether a success, and while I'm putting it in the coolroom, I notice the leftover falafel from a barbeque we catered a few days ago.  They won't see another day, the students prefer the leftover sausages for their lunch, so I decide to take them home for dinner.

They're pretty good falafels, but because they were made to not offend teenage palates, they are on the bland side.  So I decide to make some Lebanese garlic sauce to go with them. 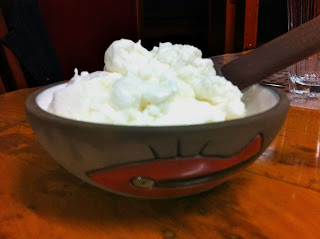 Toum, toom, or zait b'toum is the Holy Grail for garlic lovers.  It's what aioli should be but isn't since it's been discovered and reinvented for non-Spanish palates.  It is garlic extreme – there's not even a drop of olive oil to detract from the garlic flavour – and in my house, I have to stop people pouncing on it with a spoon.

For many years, I relied on my Lebanese friend Lily for it, because every time I made it, it would curdle, to the point where even though my children would still eat it, they would call it Garlic Fail.  Until the fateful day when I found Fouad's recipe and I was able to turn out an entire canister full of Garlic Win.  The family rejoiced and grabbed spoons.

Fouad's recipe is foolproof, and ideal for when you need a large amount of toum – I'll keep on using it for the rest of my life – but despite the food processor, it takes considerable care and time.  It is the only thing I make in the food processor that actually heats up the motor.  And Fouad has since posted a quicker and easier way to make toum for smaller quantities, but after a recent article on mayonnaise in Serious Eats, I suspected - sorry, Fouad! - that I could do better.

I did.  Last night's toum took two minutes flat with the stick blender - including the time it took to gather ingredients and peel garlic.  And it was full of win.  Not just garlicky, but white, perfectly fluffy and of such enviable texture that I could have cut it with a knife.  The leftover falafels went from being falafels to Those Little Round Things We Can Put Garlic Sauce on.  No waste. 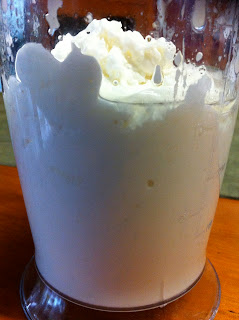 TWO-MINUTE TOUM
No joke – this toum will take you two minutes flat, if that.  You're after a light, fluffy texture, and this recipe will give you that without any effort whatsoever.  No streaming oil in, no stress about how the emulsion will happen.  Just put the stick in and watch the magic happen.  The technique is easy, but if you're nervous, check out the Serious Eats video.

What you do:
1.  Put the garlic and salt into the canister of your stick blender (immersion blender, stab mixer – whatever).  Stab a few times to process the garlic to a paste.  Remove stick blender, pour in remaining ingredients, and allow to settle for about 15 seconds.
2.  Put stick blender back into canister, resting it on the very bottom, and switch on.  Mixture will begin to emulsify from the bottom up.  When it's 2/3 emulsified, slowly begin lifting out the stick blender.  By the time it reaches the surface, all of the mixture will be completely emulsified and fluffy.

Email ThisBlogThis!Share to TwitterShare to FacebookShare to Pinterest
Labels: How to do stuff, The Essential Ingredient

Might as well read something else while you're here

I write and I cook, and have been lucky to make a living out of both, sometimes at the same time. Because of this, expect as many opinions as you do recipes.
Vibey